Andrew Wilson Williams is a high school student who has been acting in film for a major portion of his life. His first movie was We Are Marshall where he played the son of Matthew McConaughey.

When did you first develop an interest in acting?

I can’t remember a time when I didn’t act, it seemed like I was doing it from the time I could speak. I participated in church and community plays before becoming a professional. I have always had an affinity for movies and the actors that brought the characters to life. My older brother Ryan Patrick Williams, attracted the attention of casting director Shay Bentley-Griffin during an audition for Nickelodeon. She contacted my parents to work with Ryan and then saw a photo of me. We worked with her in classes and she helped us get our first agent.

What was your first acting role?

How did you get introduced to film acting?

Through casting director Shay Bentley-Griffin. Shay has had an enormous impact on my life. If she hadn’t picked my brother out of a crowd, I don’t know where I would be. She continues to be a great influence on my acting career and I am so lucky to have her as a friend and mentor.

What faith-based films have you been involved in?

The role of Zack Ross in Season of Miracles was my first faith-based film. I had a supporting role in Secrets in the Fall, released in October 2013 and was the lead character in the faith-based film, In Gramps’ Shoes.

Tell us about your role in Season of Miracles.

Getting the role of Zack Ross in Season of Miracles was nothing short of a miracle for me. My mom and I drove through Tropical Storm Lee to get to Nashville for the audition. Instead of taking six hours, the drive took eight through the storm. When I got in the audition room, the assistant director Josh Moody and the author Rusty Whitener asked me to read for the lead role of Zack. I thought they had already cast that role and had prepared for two other roles. I was so excited. I read the role of Zack and then they brought in my mom to talk about the film. A few days later, my mother picked me up from school and said I had a callback in Nashville that day. I prepared the script during our ride to Nashville and got to the callback with a few minutes to spare. Then, a few weeks later I got word the movie was being put on hold until the spring. Finally, in March I got an email that they wanted to see me in another callback in April. I was playing several roles in a community theatre production of Man of La Mancha at the same time. I left the show one night after my big scene, my parents and I drove to Birmingham, spent about four hours at a hotel, then got up and drove to Nashville for the callback. When we got there, we realized there was only one person there for each role, except for the part of Rebecca, but I was afraid to get too excited. I read with all three Rebeccas and then the baseball team was brought in to read together. After that, the producers and director met with each parent and actor individually. I was last. When they offered me the part of Zack, my mother burst into happy tears. It was a great moment and one that I had been working toward for nine years.

I was so fortunate to work with Josh Moody and Dave Moody at Elevating Entertainment, Rusty Whitener, the author of A Season of Miracles, and the screenplay, and people like Donna Botts, John Schneider, Nancy Stafford, Grayson Russell and Denny Brownlee. I finished eighth grade a month early to be able to start filming in early May in Nashville. We filmed at the Mt. Juliet baseball fields and also traveled to Guthrie, Ky., and the Boxwell Scout Reservation in Lebanon, Tenn. I love the story Rusty wrote and it was so great to bring this film to life. I learned so much about what happens in front of and behind the cameras. After we shot the very last scene, Josh Moody and I looked at each other and hugged. I had been on the set from the very first day, and even a production meeting before that, to the very last day, the very last scene. I was sad to see it end – I met so many great people and made so many friends – Nashville had become like a second home. We spent a month there and it was so wonderful.

Zack Ross is a leader among his peers. He plays center field on the baseball team and he’s a team player. He tells Duffy in the movie, Robins for Robins. He’s the cool kid, with the great-looking parents, beautiful house and interesting dog. But, he’s also struggling with his belief in God because his parents don’t go to church and he’s not sure about what he believes. His relationship with Rafer, who has autism, changes the lives of everyone around them. Zack, who could be a bully, is not. He is the good guy who protects Rafer and is always his friend. He also befriends another new player, Little Richard, whose father is in Vietnam. Zack is just a good guy with a lot of confidence. He was fun to play.

Do you have any upcoming projects?

I am in two non-faith-based movies, Demon Lake, and Grim Reapers. I have the lead role in Grim Reapers, and the director, Cade Saint, has said that it will be an old-fashioned suspense movie, not a gory horror movie. It has a really good story. In the movie Demon Lake, I play a disturbed young man, the younger version of one of the characters and I show you what makes him crazy.

What would be your dream role?

My dream role would be one that is iconic and has a strong emotional impact on the viewer. I would love to work with Bryan Cranston, Steve Van Zandt and any director who would bring out the best performance possible. 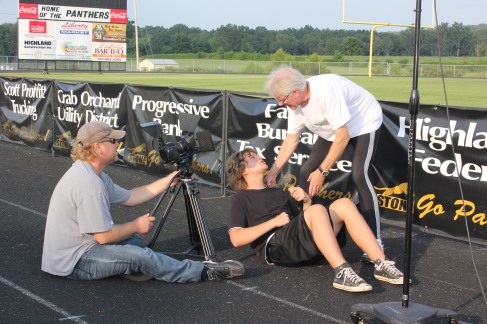 I am very lucky to have worked with so many great directors and fellow actors throughout my life. I have made some good friends and am living my dreams through my work in my film.