Written by Sharon WilharmPosted on July 8, 2016September 6, 2017Leave a comment

Fragile World is one of the many films we’ve been introduced to through the film festival circuit. We’ve been in numerous festivals together, but scheduling has kept us from watching it before. The trailer is great and I’ve heard wonderful things about the movie, so I was glad when filmmaker Sandy Boikian contacted me about reviewing the movie. 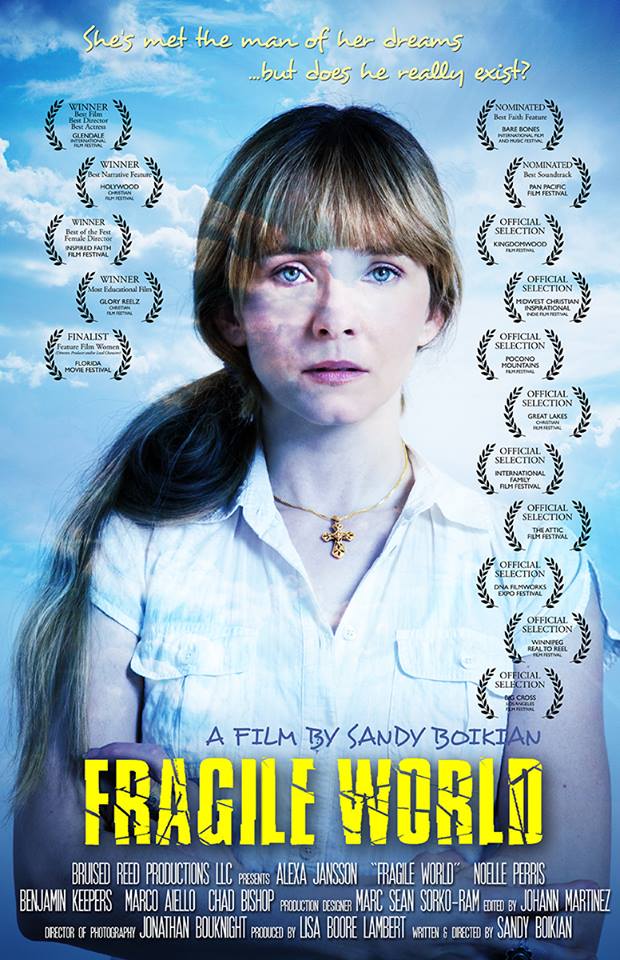 Fragile World is the story of Rosalie, a lonely interior decorator dealing with the loss of her father and a history of delusions. When she meets the man of the dreams she has to figure out if he’s real or a figment of her imagination.

Mental illness is not your usual topic for a faith-based film, and yet, Ms. Boikian does a marvelous job of integrating a Christian worldview into a powerful suspenseful drama. In a word, it’s brilliant!

From the initial opening credits I was hooked. Not only does the movie open with a great musical performance and beautiful cinematography, but the credits themselves are masterfully created to go along with the theme. As soon as the credits end, you’re caught in the game of what is real and what is make believe. I can honestly say that no matter how hard I tried to figure it out, many of the twists and turns caught me completely by surprise, and yet they worked so perfectly. They had each been subtly set up, so the pay off was extremely satisfying.

So much attention to detail went into the making of Fragile World. First, the casting was excellent. Every single character was perfectly cast and believable in their role. I was glad to see Alexa Jansson won a Best Actress role. She did a fabulous job with the emotional roller coaster ride her character goes on. I also appreciated the lighting and the use of eye lights to bring out the actors’ eyes. The cinematography was creative and artistic. The soundtrack embraced the indie sound and was spot on throughout. The editing was tight. And the story itself – perfect!

Fragile World is an example of what Christian movies should look like, a great story that incorporates authentic characters dealing with a Christian worldview. It was neither preachy nor watered down. It was an enjoyable story that drew me in and left me wanting more.

Fragile World can be ordered online at the movie website or at Christian bookstores.