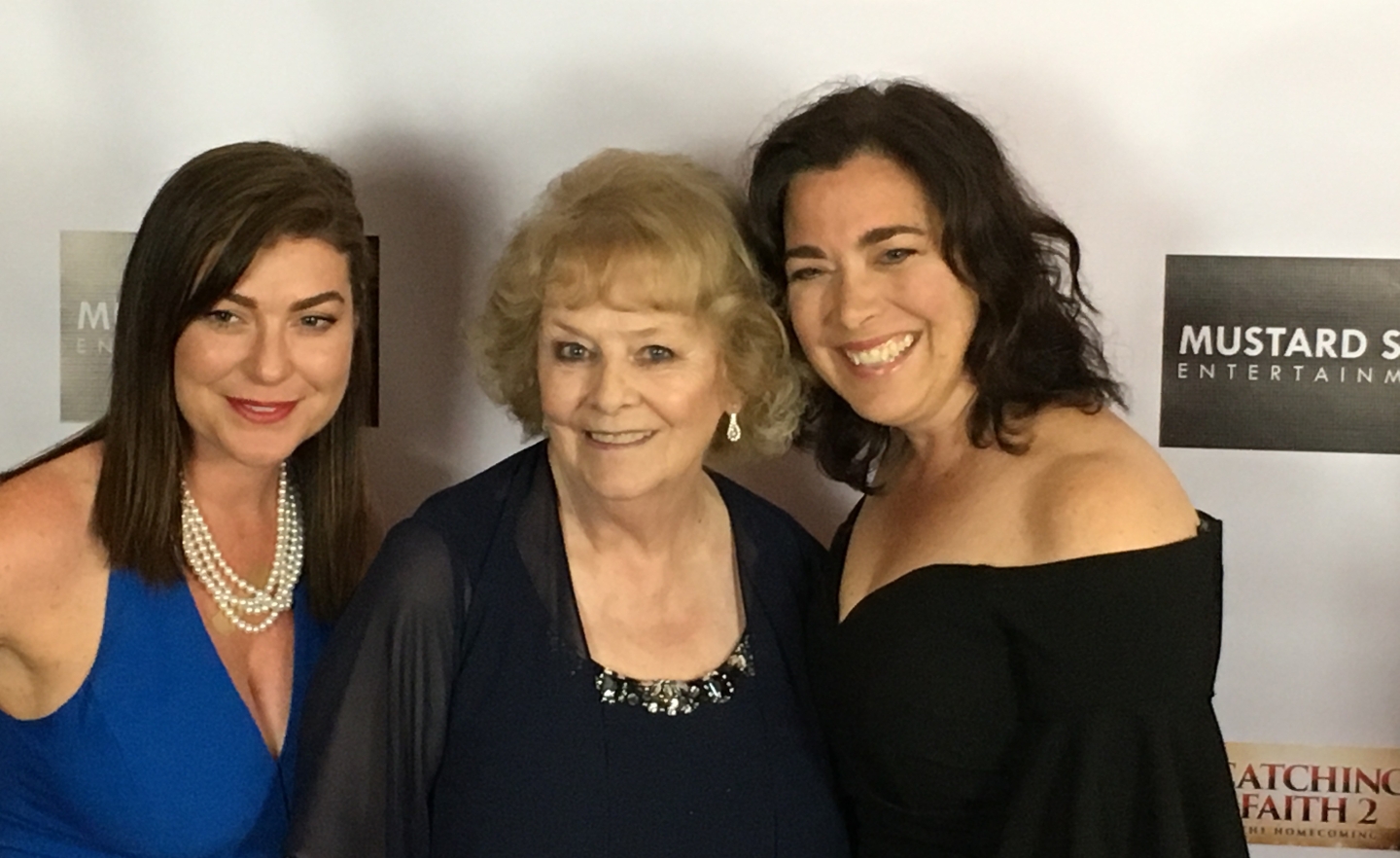 I remember when Alexandra Boylan announced they were filming Catching Faith 2 in Louisville, Kentucky and were in need of an actress to play the key role of Grandma. I had no idea who they’d end up casting, but once I saw the movie, it was obvious they had found the perfect actress to capture the very challenging role. I fell in love with actress Sandra Flagstad as Grandma, so I was excited to get to interview her and learn more about her. She’s just as fascinating a person as her character was in the movie.

When did you first discover a love for acting?

Although I was in a couple of class plays at Washington Junior High School, Green Bay Wisconsin, and truly enjoyed it, it wasn’t until I was about in my mid-twenties that I began to actively search for audition opportunities in local community theatre productions in Green Bay. Someone suggested I audition for The Chancel Players, which I did and toured Wisconsin with the project, The People Versus Christ. It was during this performance that I first discovered the “electricity” that flows through an actor, and between your fellow actors on stage. It was an awakening to me. And I experienced a deep-seated desire to seriously pursue acting as my “reason for being!”

Tell us about your first acting role.

I was twelve years old, walking down the hallway at Washington Junior High School, Green Bay, and asked my friends, “Where you’re goin’?” “Over to Room 101 to try out for the class play,” they replied.  I just tagged along, not knowing what to expect. Didn’t know scratch about theatre, acting, scripts, etc. But as I observed the other students reading for the roles that were being auditioned for, it intrigued me. When the drama teacher asked if anyone else would like to read for the role of Estelle (the child Estelle in Charles Dickens Great Expectations), I raised my hand.  I was cast in the role, upon condition: I had to keep my grades to a C!!! My heart sank! That was like asking me to do neurosurgery!! But, I squeaked by!

I see you trained with Bill Hickey of the Herbert Berghoff Studios. What was that like? What was the best advice he ever gave you?

I was afforded this opportunity at probably the most difficult time in my life. I was 41, living in NYC, and still trying to hang on to my acting “dream,” not as a hobby, but to do some challenging breakout roles. It was a nagging desire that never was quieted.

My first assignment was a simple improve scene with a fellow actor, in my case an eighteen-year-old boy.

Hickey’s critique of my performance “saved” my dream. “I’ve been in theatre most of my life, and I haven’t seen acting like this in the past fifteen years,” he remarked to the class.  His words were like tonic to me, and I had no doubt God allowed our paths to cross, so I wouldn’t believe the lies that pummeled me, “You’re too old.  You don’t have talent!” The next time those words thundered in my ears, I could just slough them off, because I remembered Bill Hickey’s critique; it was like balm to my wounded soul.

I don’t remember if he, in fact, did give me any advice. I just remember being so thankful that I could sit in a New York acting class, with Bill Hickey as our coach.

You did one-woman shows. Tell us about that.

Years ago I did a one-woman show on the life of missionary Lillian Trasher. I had written a screenplay on her life, and subsequently extracted a thirty-minute, dramatic monologue, fully costumed with music, and sound effects, which was performed in clubs and churches in the surrounding area of Charlotte NC.

What led to you getting the role of Grandma Loretta in Catching Faith 2?

I saw the post listed on the site of Treasure Coast Talent Agency.  There was only one role listed, “Grandma.” I said to myself, “For Pete’s sake, I can do grandma!” So I submitted; got an email response from Alexandra Boylan asking to do a Skype interview, which I did with her and Director, John K.D. Graham. John wanted to test me to see how I responded to re-direct. They offered me the role on that Skype call. Of course, I was over the moon thrilled, because CF2 would be my first full feature film.

What was the greatest challenge of doing film acting vs. stage acting?

Actually, I didn’t see it as difficult, or a challenge, as I already knew the technique was different, i.e. stage (broad) vs film (intimate).  So, I knew going in, my performance was going to be intimate, subtle and nuanced.

What was the highlight of filming Catching Faith 2?

There were so many wonderful moments; it’s hard to choose one. I absolutely loved the car scene, and her disdain toward the “old folks home” and the boring Bingo game.  But after the cake scene, which was the end of my shoot for the project, I went to the rest room to get the cake cleaned off of me. Andrea Polnaszek (one of the writers, along with Alexandra Boylan), came rushing in. “Hurry, Sandra. They’re waiting for you. Hurry!” I didn’t know what was happening. She hurried me back to the Wedding Set, and there in front of me was the entire cast and crew standing in a semi-circle, clapping, and cheering my performance. I was stunned. To me, it was such an overwhelming message of acceptance. My heart turned. Such a warm moment I shall never forget.

You’re also a writer. Tell us about your books.

I’ve written and narrated three children’s books, the title character being a chipmunk, and all his skirmishes with his archenemy, Slink, the weasel, his loathsome nemesis, Squire Squirrel and other unsavory neighbors. Some day I’d love to see the stories in animation format.

I’ve also written and narrated a collection of biblical devotions.

These are all presented on harvestaudiobooks.com, and are free downloads.

What are your dreams/goals for the upcoming year?

I have been recently cast in Worthy – the Movie; writer/director is Bruce R. Snyder. I’m over the moon thrilled to come on board with this project for 2020.  I’m also continuing to look for more opportunities in both dramatic and comedic roles, whether for film or television.

Finally, I’d just like to encourage anyone to “Go with your strengths” as someone advised me many years ago. And also, identify your passion, which will probably reflect your strengths. And never forget, God has our name written in the palm of His hand. He knows where we are, what He wants to do with us, our purpose, and how to get us from Point A, to B, etc.! I rest in that!