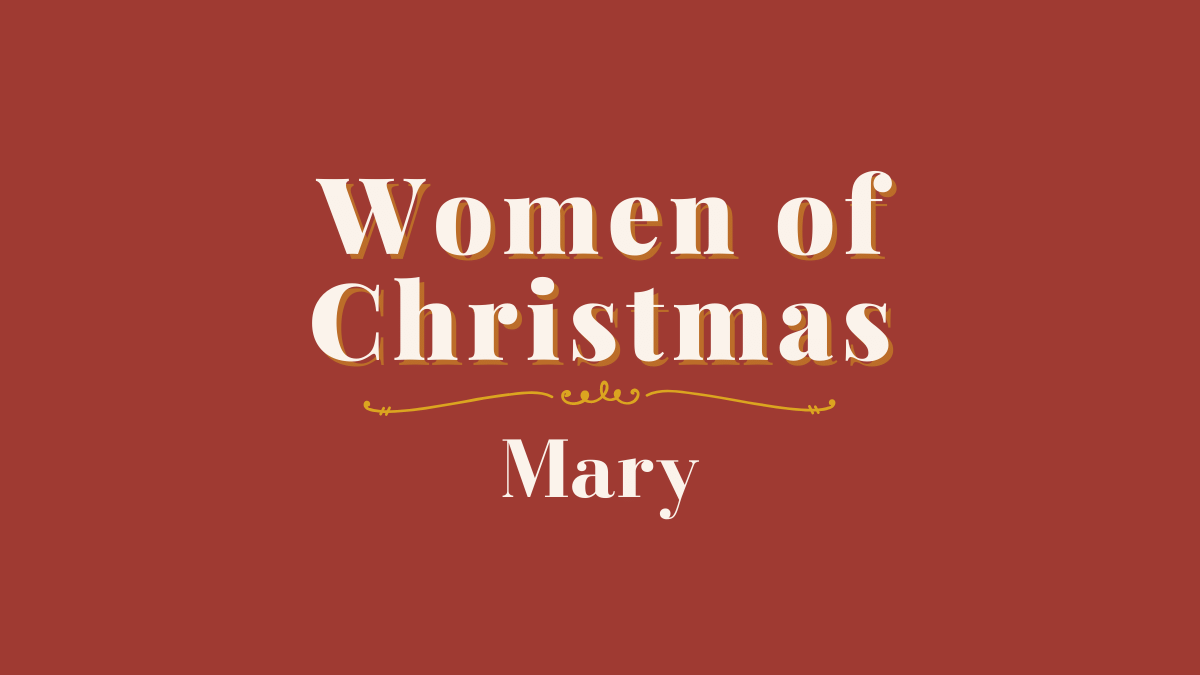 How do you react to change in your life? If God came to you today and told you what He had in store for your future, how would you react? Would you eagerly follow. or would you ponder on it for awhile?

In today’s episode of All God’s Women we continue the Women of Christmas series with Mary, a young peasant woman greeted by an angel and told that she would supernaturally bear a child who would save the world. Her response? “Let it be according to your word.”

Mary’s story is far too long to include in just one short episode, so for today, we’re just focusing on Mary and the birth of her son. Even so, it’s a lot to cover, so hold tight while we cram a whole bunch of story in a short amount of time.

Both Matthew and Luke provide accounts of Mary’s Christmas story, but Luke tells the story from Mary’s perspective and Matthew from Joseph’s, so we’ll concentrate on Luke’s account.

We learn in Luke 1 verse 26 that when Elizabeth was six months pregnant the angel Gabriel came to Mary at her home in Nazareth. He greeted her with, “Rejoice, highly favored one, the Lord is with you; blessed are you among women!”.” Can you imagine?

Here is a young woman from a poor, nondescript family, minding her own business, and an angel shows up at her doorstep and greets her in this way. It says that she was troubled at his saying, wondering what he was talking about. She certainly didn’t see herself as a favored one nor understand what made her blessed among women. What was this man talking about?

She kept her thoughts to herself, though, as he continued. He told her to not be afraid for she had found favor with God. She was going to conceive a son and name him Jesus, and He would be the Messiah.

I’m sure her mind was swirling with questions, but all she asked was how that could be since she was a virgin.

The angel explained to her that the Holy Spirit would come upon her and overshadow her and that’s how she would become a mother. Then he told her that her cousin Elizabeth had conceived in her old age and was in her sixth month of pregnancy. He concluded with “For with God nothing will be impossible.”

Mary responded to all this incredible information by simply replying, ”Behold the maidservant of the Lord! Let it be to me according to your word.” Then the angel went on his way, and Mary went with haste to the city of Judah where Elizabeth lived.

It’s interesting that when she arrives at Elizabeth’s house, Elizabeth greets her with the same words the angel used, “Blessed are you among women.” Both women are excited by all that’s going on, yet humbled to think that God chose them, of all women.

Mary responds with what is known as Mary’s Magnificat or Mary’s Song:

“My soul doth magnify the Lord,
And my spirit hath rejoiced in God my Saviour.
For he hath regarded the low estate of his handmaiden: for, behold, from henceforth all generations shall call me blessed.
For he that is mighty hath done to me great things; and holy is his name.
And his mercy is on them that fear him from generation to generation.
He hath shewed strength with his arm; he hath scattered the proud in the imagination of their hearts.
He hath put down the mighty from their seats, and exalted them of low degree.
He hath filled the hungry with good things; and the rich he hath sent empty away.
He hath helped his servant Israel, in remembrance of his mercy;
As he spake to our fathers, to Abraham, and to his seed for ever.”

She may have been a simple, uneducated girl, but the words that flowed from her heart were beautifully expressed.

After a three month stay with Elizabeth and Zacharias, Mary returned home. But, then, as her due date loomed ahead, Caesar Augustas sent out a decree for a census. Joseph and a very pregnant Mary had to travel the 80 miles from Nazareth to Bethlehem in order to be counted. When they got into town, the inns were full, so they found shelter in a stable, and that’s where the long awaited Messiah was born.

The city was bustling with crowds of people, and yet no one paid much attention to the young couple huddled together in the stable. God could have alerted the masses to let them know what was going on, but instead, he sent a multitude of angels to share the good news with a motley crew of shepherds who were living outside in the nearby fields. They came with haste to check out this amazing occurrence then went on to share the news with anyone who would listen.

But Mary, we’re told, merely kept all these things and pondered them in her heart.

As I study each woman, I try to put myself in her place. What might she have been thinking? What motivated her? How is she like me? I’ve got to admit, it’s hard to put myself in Mary’s place. But then, that’s why God chose her. She wasn’t like other women.

All the young women of Mary’s day dreamed that they might be the one to be chosen as mother of the Messiah. No one knew when or how it might happen, but no one, especially Mary, expected God to pick such a humble woman. She didn’t come from a wealthy family. In fact, we know almost nothing about her parents, other than her father was named Eli, and he was of the house of David. Where were her parents in all of this? Why aren’t they mentioned? We don’t know. All we know is that they raised up a daughter who loved the Lord with all her heart.

Whenever an angel appears to someone in the Bible, the first thing they usually say it to not be afraid. In Mary’s case, he first greeted her with honor and respect, letting her know that she was highly favored and blessed among women. Then he told her not to be afraid.

Imagine, having the angel Gabriel greet you by telling you that you were highly favored by God. How could you possibly respond to that? I’m afraid if it were me, I’d be looking around to see who he was really talking to. But Mary calmly took it all in and waited to see what he was talking about.

When he told her she was going to conceive a baby who would save the world, her only question was how it would happen. Imagine the kind of faith that would take in such an astonishing proclamation and merely ask how.

And then, when he explained about the Holy Spirit coming upon her and overshadowing her, she simply responded, Let it be. What he was saying made no sense to her. How could it? This was not anything that anyone had ever experienced before. And yet, she accepted her assignment without hesitation. And that kind of faith is why God chose her.

Perhaps, if she were a wiser woman, more educated, more curious-minded, she would have asked more questions. She might have worried more and been more resistant. But in her childlike simplicity she took the angel’s words at face value and accepted them, no questions asked.

The most amazing thing about Mary is that she wasn’t changed by the experience. Most women would have grown arrogant and prideful. We might have obsessed over the responsibility and worried over the details, trying to be the perfect mother. But not Mary. She went along with her life, quietly accepting whatever God gave her.

Imagine, knowing that you were carrying the Savior of the world, and yet, you had to sleep in a stable. I’m pretty sure I would have fussed and fumed at the indignity of it. But Mary accepted it without complaint. And when God sent smelly local shepherds to come check out her baby, she sweetly smiled and welcomed them. Then, later, when royal wise men came from far away lands, she calmly entertained them as well. Mary was no respecter of persons.

As we prepare for the celebration of Jesus’s birth, may we reflect on Mary and all that we can learn from her.

May we remember that God doesn’t see us the way the world sees us, and even though we may feel insignificant, who knows but that someday God might surprise us with a life mission that is bigger than anything we could possibly imagine. And if that time comes, may we respond as Mary, accepting the call and following without question.

When we get consumed with the details of Christmas, fretting that Christmas 2020 is not the way we planned, may we remember Mary and how she handled sleeping in a barn.

When we worry about having to have everything just perfect for our families, may we remember the birth that God provided for His Son.

When we’re faced with unexpected guests or find ourselves confronted with others who move in different social circles than us, may we remember how Mary treated both shepherd and wise men with the same hospitality.

Finally, whatever it is that you’re going through in this season, may you be like Mary and ponder it in your heart, trusting God to take care of all the details.

Lord God, it’s so hard for us to understand why You do things the way You do. Why did You send Your son to be born as a baby to a peasant girl? Why did You allow Your son to be born in a manger in a stable? Why did You allow Your son to be later crucified on a cross? Of course, we know why You did it. You did it for us. Lord, how can You love us that much? We are so unworthy. Thank You that Your love is not dependent on our goodness. Please be with us, guide us, grow us so that we might be worthy of the work that You have for us. We love You. In Christ’s name we pray. Amen.

That concludes today’s episode of All God’s Women. Next week we continue with our Women of Christmas series, talking about Anna, another woman blessed by God.

Don’t Miss Out On Future Episodes!