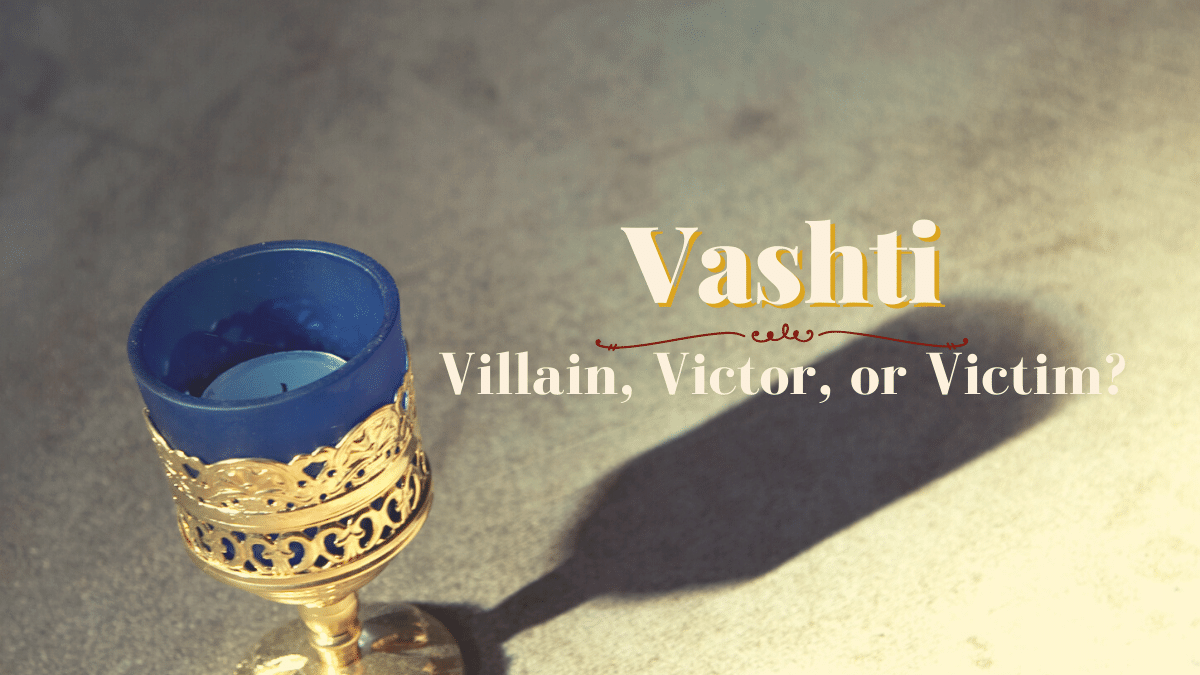 Submission, what does it mean to you? Do you always submit to your husband or to those in authority? Why might you not submit to them?

In today’s episode of All God’s Woman, we look at Queen Vashti, a woman who openly defied her husband, and as a result was banished from her royal position.

We all know the story of Esther, but if not for the actions of Vashti, there would be no Queen Esther. Vashti was the original wife of King Ahasuerus, and what a mighty king he was. During his reign he was the most powerful king in the world, reigning over 127 provinces from India to Ethiopia. Imagine that kind of power!

The king was a proud man and wanted to make sure that everyone knew great he was and how magnificent was his palace. So in the third year of his reign, he held a feast unlike anything we could possibly imagine. He invited his officials and staff, the Persian and Median armies, the nobles, and the officials from all the provinces for a feast lasting 180 days. That’s six months of partying! How do you possibly celebrate for that length of time? I guess when you’re the most powerful man in the world, you can do whatever you want.

But eventually, the party wound down. As a grand finale, the king invited all the residents of Shushan, the capitol city, for a weeklong feast. Everyone, however great or insignificant, was invited to the festivities. Wine was served in gold goblets, each with a unique design distinguishing it from the others. Wine flowed freely with the king giving orders to the wine stewards that every man was to have as much to drink as he wanted.

Imagine, if you will. The palace packed with men, many of whom were likely unused to having unlimited supply of food and alcohol. Of course, they’d want to gorge themselves, taking advantage of the opportunity. It was a crazy, drunken brawl.

At the other end of the palace the queen held her own feast for the women.

At the end of the feast, when the king was merry with wine, or in other words, drunk, he sent his seven personal eunuchs to go get Vashti so that he might show off her beauty to his drunken admirers.

But something unexpected happened when they arrived at the women’s banquet hall and gave their orders to the queen. Instead of obediently following them, she said no. She gave no explanation. She just refused to go.

Imagine the looks of shock on the eunuchs’ faces and the confusion as they tried to figure out how to handle the situation. Was this woman seriously rejecting the king’s command? I would not have wanted to be one of those eunuchs who had to deliver the message to the king.

Understandably, King Ahasuerus was furious. Here he’d just announced to everyone that his wife was coming to parade her beauty, and now she’s refusing. Not to mention, how does it look when he’s spent all this time showing off his power, and yet, he apparently lacks control over his own wife? What an embarrassing situation, and not one to be taken lightly. We’re told his anger burned within him.

I’m sure that put an end to the festivities. The king probably had his servants ushering out the guests as discreetly as possible, hoping maybe they hadn’t noticed what was going on. But how could they have missed it?

As soon as everyone was gone, the king gathered together his wise men, the seven princes of Persia and Media, and asked what could be done to the queen who had broken the law by refusing to obey his command.

Memucan, one of the princes, told him that the queen had not only wronged the king, but also all the princes, and all the people in all the provinces of Persia and Media. He went on to say that the queen’s behavior would become known to all women, so that they would despise their husbands in their eyes, for if King Ahasuerus commanded Queen Vashti to be brought in before him, but she did not come, surely all the other women would do the same in their own houses. He pointed out that already, the Persian and Median women of the nobility would have heard about the queen’s conduct and would respond to all the king’s nobles in the same way. He concluded there would be no end of disrespect and wrath.

Fortunately Memucan had a solution. He proposed that the king send out a royal decree, and let it be recorded in the laws of the Persians and the Medes, so that it could not be altered, that Vashti shall come no more before King Ahasuerus; and let the king give her royal position to another who is better than she. That way when the king’s verdict was proclaimed throughout the land, all the women would respect their husbands.

It sounded good to the king and the other nobles, so that’s what he did. He sent letters to all the king’s provinces, in their own language, so that everyone would know that each man should be master in his own house.

The Rest of the Story

As wife of the most powerful man in the world, Vashti had untold wealth and privilege. She had access to anything her heart’s desired. She wore the finest clothes in the land and decorated her home with the best that money could buy. She was the definition of privilege, the envy of all other women.

And then, in one fell swoop, she lost it all.

I used to see Vashti as the Villain. She had to be if Esther was the Hero. Many commentators paint her as a stubborn wife who should have submitted to her husband. But the more I study, the more I realize it’s not so black and white.

First, what did Vashti have to gain by standing up to her husband? Not much. She know the law. She knew to refuse his command would put her position in jeopardy, possibly even resulting in death. So why would she do it?

The only reason I can think of is that she didn’t want a roomful of drunken men gawking and ogling her. She may have been a pagan queen, but even so, she had her dignity. No self-respecting woman would put herself in that position. She had a choice to make, and it wasn’t an easy one. She chose to maintain her self-respect even if it meant losing everything else.

And lose it, she did. Not only was she denied her position as Queen and banned from ever having contact again with the king, but she was publicly disgraced and used as an example throughout the kingdom.

What about you? Have you ever dreamed of being rich and famous? Have you ever wished you could marry a prince so you could be a princess and maybe someday even a queen? It sounds like a dream come true, but the royal life has its own problems.

If you were in Vashti’s position, what would you do? Would you submit because it’s the right thing to do? Or would you have the courage to say no?

Have you ever taken a stand for what’s right and been punished as a result?

Sometimes, like in Vashti’s case, right and wrong isn’t always obvious. Vashti didn’t have the advantage of being able to turn to God for wisdom. She didn’t know Him, but we do. In the upcoming days we will be faced with difficult moral issues and may not have a clue which is the right thing to do. When that happens, remember, while it may not be obvious to you, it is to Him. So give it to God, and let Him direct your paths. And if you have to make a difficult decision to do the right thing, and it looks like you’re going to lose all that’s dear, remember, He is all we need. As long as we’re following in His footsteps, He will not lead us astray.

Lord God, we come to you today seeking wisdom. Like Vashti, we’re often faced with challenging choices and we don’t know what to do. Thank You for always being with us and for taking our hand and guiding us through the difficult paths. Give us the courage to always do what is right. Strengthen us when our enemies gang up against us. Forgive us those times we fall and feel like we’ve failed You. Thank You for picking us up from the ground and setting us back on solid ground. We love You so very much! In Christ’s name we pray. Amen.

Listen and Subscribe to All God’s Women
on your favorite podcast platform.

All God’s Women is a Bible study podcast for Christian women.
Each week we focus on a different woman in the Bible.