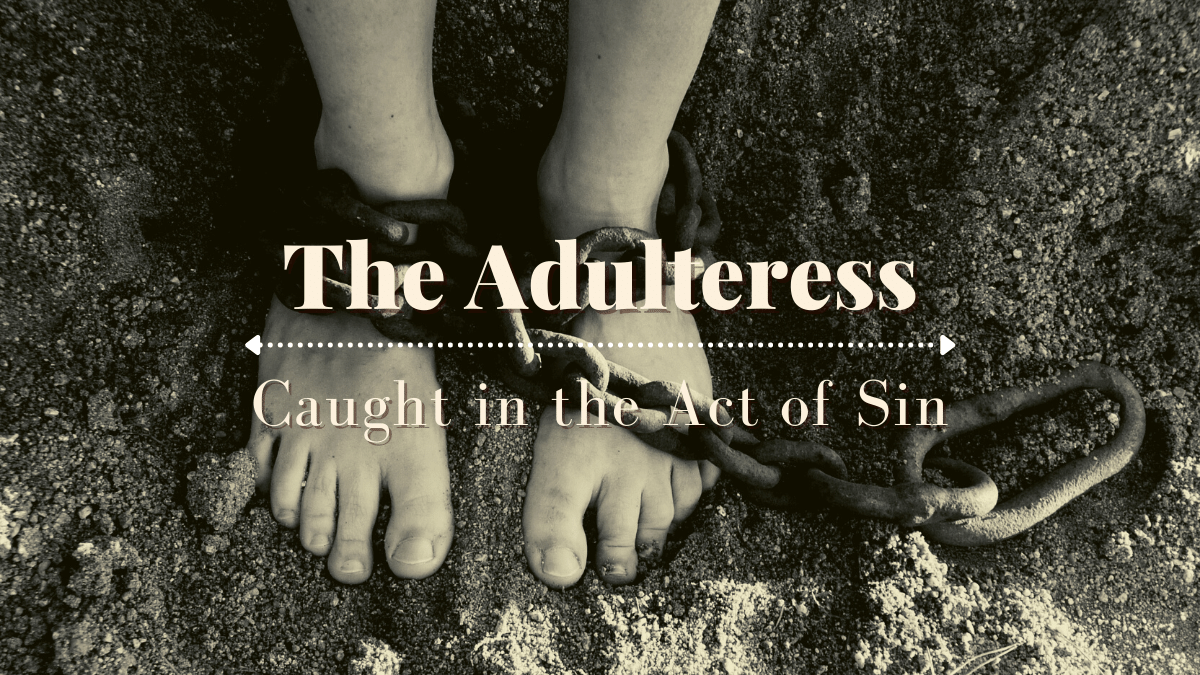 The Adulteress: Caught in the Act of Sin

We’ve all sinned, but what do you do when you’re caught in the act of sin? How do you react? How do you expect others to react? In today’s story of The Adulteress, we meet a woman who waited when she could have escaped.

We meet The Adulteress in John chapter 8, but in order for us to fully appreciate her story, we need to understand the time period in which it takes place.

Tension was building up. Jesus was at the Feast of Tabernacles saying things people didn’t understand. None of it made sense. Many were rejecting Him. The rulers were seeking an opportunity to bring Him in for questioning, but they didn’t have just cause. It was a time of confusion and chaos. No one knew what to think. Frustrated, they waited for the opportunity to arise to get rid of Jesus so they could go back to their status quo. John chapter 7 closes with, “everyone went to his own house.”

Then chapter 8 opens with, “But Jesus went to the Mount of Olives.”

Jesus spent the night in prayer, then early in the morning He went back to the temple. People gathered about Him, so He sat down and taught them. While He was teaching, the scribes and Pharisees brought to Him a woman caught in the act of adultery. They led her front and center of the crowd and confronted Jesus.

“Teacher, this woman was caught in adultery, in the very act. Now Moses, in the law, commanded us that such should be stoned. But what do You say?”

Jesus said nothing. Instead, He stooped down and wrote on the ground, acting as if He hadn’t heard them.

They persisted, asking Him what should be done with her.

He stood up and addressed them.

“He who is without sin among you, let him throw a stone at her first.”

Then he bent back down and wrote on the ground again. While He wrote, they all left, starting with the oldest. When He stood back up, the accusers were gone. Only the woman remained.

“Woman, where are those accusers of yours? Has no one condemned you?”

As she exited the scene, Jesus turned to those who He had been teaching before the commotion and said, “I am the light of the world. He who follows Me shall not walk in darkness, but have the light of life.”

The Rest of the Story

The religious leaders did not like Jesus. They didn’t understand Him. He didn’t fit with their religious views. He said things that made them uncomfortable. At times, He just plain made them look bad. They wanted to get rid of him. The problem was figuring out how to it.

Bringing The Adulteress to Jesus was their attempt to trap Him. If He said she should be stoned, they could come back and say He was taking authority that He didn’t have. It would also go against His teachings of mercy and forgiveness. If He said she should be spared, He’d be going against the laws of Moses, thus antagonizing the religious leaders.

The Adulteress was a pawn, caught up in the drama going on between the leaders and Jesus. Who was she? What were the circumstances of her adultery? Why was only she there and not the man?

She wasn’t an innocent victim. The Bible confirms she was guilty. But what led to her sin? What did Jesus see when He saw her?

We don’t have the answers to who she was nor what motivated her. We do know, though, that when Jesus looked at her, He saw past her sin and saw a woman in need of a Savior.

It’s interesting to note that while Jesus wrote on the ground, her accusers disappeared. She could have fled the scene in shame after them, and no one would have thought anything about it. But she didn’t. She stood there waiting for Jesus to address her.

This woman had been looking for love in the wrong place. Now, as a result of her sin, she was face to face with the one man who had never sinned. Imagine the mortification she must have felt. It was bad enough being caught in her sin. Obviously, she’d thought she was being discreet. She thought no one would know what she was doing. But she was found out. Not only that, but in the midst of the act, these religious leaders stormed the room, yanked her out of the bed, probably gave her little time to get dressed, led her down the streets and into the temple, in front of a crowd of worshippers, and made sure that everyone knew exactly what she’d been doing. Can you imagine anything more humiliating?

It would have been easiest to run away, but by standing firm and waiting for Jesus, she was able to witness His transforming power. When she stood face to face with Him, she didn’t see condemnation. Instead, she saw compassion and forgiveness. She witnessed firsthand what real love looked like. No longer would she need to chase after worldly passion now that she had discovered for herself transformational love.

We’ve all sinned. We’ve all done things behind closed doors that we hope no one ever finds out about. But no matter how discreet we may be, He still sees our sins. Though no one else may have a clue what we’ve done, He knows.

Any yet, He who knows us best, loves us most. While the world may look at us and see our sin, He sees our soul. He sees us as a life worth saving.

I love what Jesus says as the Adulteress goes off to start her new life.

The adulterous woman deserved death, but Jesus gave her life.

It may be that you’re lurking around in the shadows, doing things you know you’re not supposed to be doing. You may feel safe in the darkness, fearful of being exposed to the light. But if those religious leaders had not drug The Adulteress out of the darkness, she would not have experienced the life changing impact of the Light of the World.

What they meant for evil, Jesus used for good. She was a pawn in the hands of the religious leaders. They were right there in the dark with her. But once she was introduced to the Light, she was never the same. Jesus showed her a better way.

You too, can come out of the darkness and into the light. You can bring your sins to Him, and rather than receiving condemnation, you can receive His gift of life. The choice is yours. Wallow in darkness or revel in the light.

Lord God, thank You for Your mercy and grace. Thank You for seeing past our sins and instead focusing on our souls. Thank You that in those times in our lives when others seek to harm us, that You come in and use it for Your glory. Thank You for lifting us out of the darkness and leading us into the light. Please forgive us for those times we fall short and go off in directions that cause sorrow to those around us. Open our eyes to the sins that we commit convincing ourselves that it’s ok and that we’re not actually sinning. Reveal to us the truth. Make it clear what we should be doing. Thank You for loving us when it seems we’re all alone. In Christ’s name we pray. Amen.

Tune in next week when we look at the Blind Man’s Mother.

Listen to All God’s Women on these and other podcast platforms.