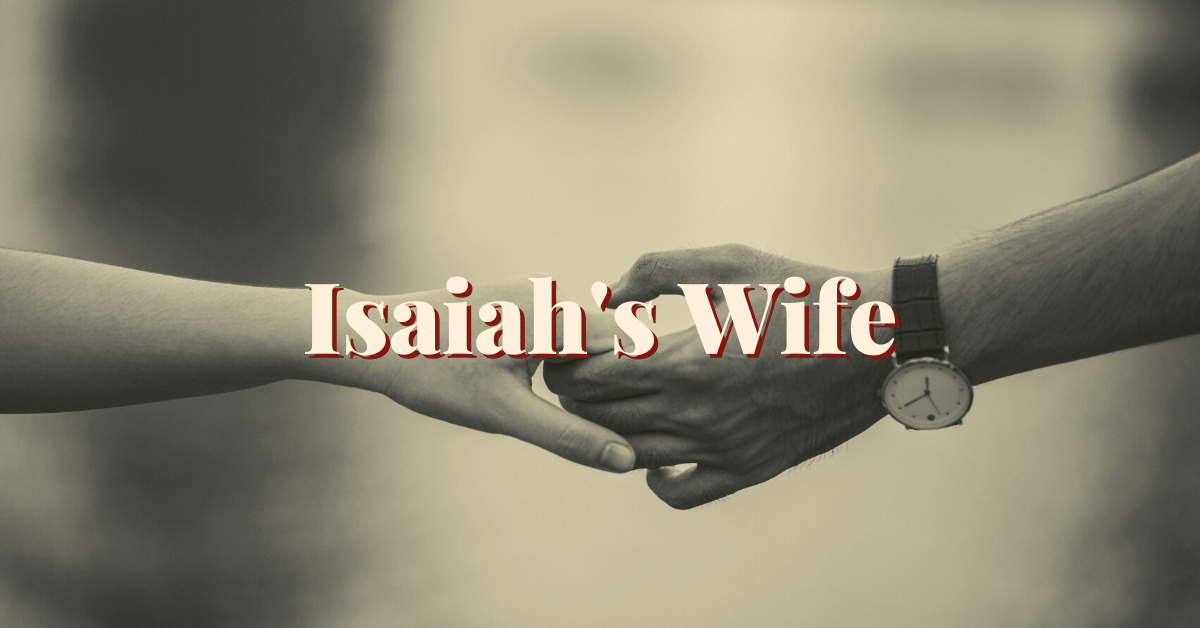 Today we’re looking at Isaiah’s wife. You would think considering Isaiah was such a prominent figure in the Bible and the book of Isaiah is one of the longest books in the Bible with 66 chapters, that there would plenty of coverage of Mrs. Isaiah. In fact, though, she is mentioned only once.

In Isaiah 8:3 we’re told, “Then I went to the prophetess, and she conceived and bore a son.” That’s it. That’s the only time she’s mentioned.

So what does this tell us?

Well, if we look at the life of Isaiah, he was a mighty man used by God to prepare the way for the coming Messiah. We know little about his personal life. We know him as a prophet who used beautiful language to warn the Israelites of what was to come. He was a teacher, a disciple, and a counselor. Isaiah was a busy man, dedicated to his work.

All we know about Isaiah’s wife was that she was a prophetess who bore him two sons, but I think like Mrs. Noah, the fact that little is said about her speaks volumes. Mrs. Isaiah was obviously a spiritually strong woman. Whether she prophesied herself or is just referred to as prophetess since she was married to a prophet is unclear. Personally I tend to go with her prophesying herself since nowhere else is a wife of a prophet referred to as a prophetess. It would make sense for them to serve together. Perhaps while he was out speaking to the masses, she was quietly ministering and speaking to the women. We don’t know.

They say that behind every great man lies a great woman. That may not always be the case, but I firmly believe that as women we have great power over the men in our lives. We can use that power for good. Or we can use it for evil. But when a godly woman pours into her husband, supporting him and serving him, God can use the both of them in mighty ways.

If you’re married, I hope you’re married to a great man. If so, be sure to encourage him today and let him know how much you love him. Ask him how you can help support him so that he might be all that God designed him to be.

If you’re married to a man who’s not so great, ask yourself, is there anything you can do to help make him a better man? Are you unintentionally tearing him down with teasing or criticizing? What might happen if you looked for the good in him and let him know that you’re there for him? As God to open your eyes to ways that you might build him up rather than tearing him down.

Lord God, thank You for this reminder of how important it is for us as wives to support our husbands and to build them up and not tear them down. Lord, open our eyes to what it is You would have us to do as wives to help make our husbands all that You would have them to be. Forgive us those times we get caught up in ourselves and destroy rather than build. Help us to get out of unhealthy habits and grow into more godly behaviors. We love You. In Christ’s name we pray. Amen.